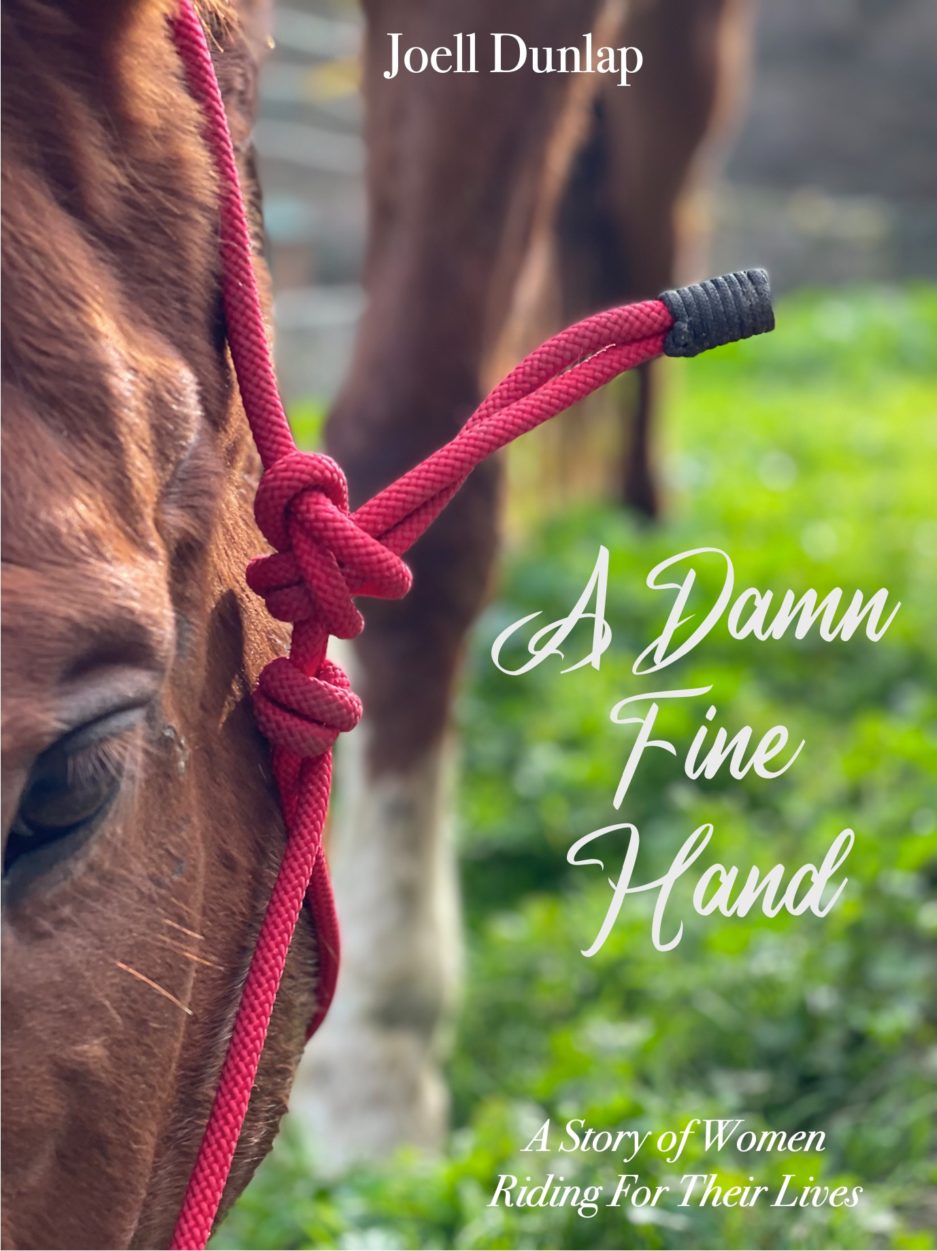 There was at least another hour of darkness before the sun turned the San Gabriel mountains their famous shade of purple. Four hours after that, before the second race, Los Angeles smog would smother them in dingy gray.

The coffee in the plastic mug was terrible. The only coffee available in the middle of the night was from the convenience store and there’s no telling when it was brewed. Luckily there were plenty of packets of sugar and powdered creamers to use. The store stocked her favorite energy bars and she choked down two between gulps of sticky sweet coffee.

Most of the horses were dozing. The grooms had yet to appear from the dormitory style rooms above the barns. She ducked into the office for a few more minutes of quiet before the daily circus began. The Celebrex she took night before was doing it’s job and she flexed both knees, expecting the sharp catch in the left knee and the hollow pop from the right. Both were quiet today. She made a mental note to cancel another appointment with the orthopedic surgeon.

Once in the barn, it was time to go from stall to stall, removing the stable bandages and feeling for heat or swelling in each leg of the 25 stall barn. Both knees of the old campaigner Vaya Con Dios were hot this morning but he’d eaten up every ounce of his grain from the night before. While the nervous filly Mercy Street hardly touched any of last night’s meal and yet all four legs were a healthy ice-cold. She’d talk to Jude about ulcer meds for the filly.

One by one, legs were checked. She indulged herself in a chance to pause and reflect on her favorite time of the day. Just her and the horses, before the grooms appeared, the gallop boys, the overly solicitous jockey’s agents, the Boss and later the owners.  She paused by the stall of one of the big stake horses and produced two peppermints. One for him and one for Elvis, his companion goat tied in front of his stall. The muscled gelding chomped the candy as she wrapped her arms around his neck. “Nobody would believe a horse as fast as you is a total pushover,”  she whispered into his shoulder.

One last horse to go and she’d have to wait for Enrique the barn foreman to help.  Invictus – the Big Horse in the barn these days was more than big, he was a Sonofabitch.  Taking the wraps off his muscular orange legs took timing, nerve and at least two knowledgeable people.  If he wasn’t striking, he was biting at you with the intent to rip flesh.  He’d run off two good farriers from the barn and sent a vet tech to the hospital already.  She watched as he attacked the feed in his hay net looking her way in between vicious bites as if to say “you wanna piece of this?”

“Think he’ll do okay in Chicago?” It was the Boss, Jude Keenan. It was rare to see him at the barn this early.
“He’ll kill them if we catch a wet track,”  she replied.
“How’s his foot?”
“You go in there and check,” she laughed.

He laughed too.  It had been three years now since he’d lured her away from another trainer.  He was the new kind of Thoroughbred trainer; smart, handsome and flashy.  He drove a fast car and ran with a fast crowd. An astute businessman, he ran his business ruthlessly and well. His clients won and as a result they loved him. He left Ann to the hands-on with the horses while he cared for the owners and the business. He knew his barn was thriving because of her and he compensated her well for it, in cash. For her part, she rarely complained and she tolerated his tirades better than his last two fiancees.

“Hey,” she asked “aren’t you wearing the same clothes as yesterday’s races?”

“So what if I am?” he self consciously rubbed his stubbled chin, puffed up his chest and adjusted the jeweled belt buckle of his expensive jeans smiling wickedly.

“The girl from the Lakers?”  she rolled her eyes.

“Be nice, she’s fun and she’s rich and her daddy just might buy a slew of racehorses with us at the sale next month.”

“You think you can manage to keep her around for a month before she hates your guts?”

“God you’re mean.  And just in case Julie comes around, maybe you don’t want to mention anything,”  he raised his eyebrows playfully.

“Is lying to your girlfriends in my job description now?”

Pretending not to hear her, he headed towards the office.

Dee drew hard on the joint, held the smoke low in her rib cage and coughed  as she exhaled. She allowed herself two lungfuls of marijuana each morning. She watched the laundry she’d forgotten to take down yesterday blow in the early breeze. She stubbed out the roach, went into the house and placed it in the carved wooden box. She closed the box firmly and stashed it behind the mound of sweatshirts in her bedroom closet.

She washed her hands and face and waited for the knots in her belly to loosen. The strange, tingly sensation unfurled in her chest. She smiled, knowing the blessed relaxation she craved would follow. Placing her ball cap on her head, she remembered her gloves, called the dogs from the front room and headed out to feed the waiting horses.

Back in 2007, a dear friend entrusted us with the care of her family’s two horses while they went on a year long adventure.

This is the poet Lisa Allen Ortiz. Her latest book of poems Guide to the Exhibit – is not to be missed.

We’d just brought to the ranch a horse from the track.  That horse, “My Cheatin’ Heart”  aka Hank by Kentucky stallion Broken Vow became one of the great loves in my son’s life. He was a gift from our friend Jeanne Shand.

Lisa was inspired after meeting Hank to write this poem.  The poem haunted me and I couldn’t get it out of my mind.  I couldn’t figure out how this arrangement of words could bring tears to my eyes and chills to my skin each time I read it.

I sat down to journal on why the poem affected me so deeply – and what started to roll out from my pen was a story.

The way the heart is wrapped in blankets

the remnant a weedy lawn at our ankles,

a gown we’ve removed in tatters, a dream we decide

until a horse appears––

not far away in a field

not faded or rusted or ancient.  This horse

was coddled in stalls, kept from the eyes of mortals

something they say can’t exist––

and they call that a star or a blaze.

Oh, reach in your pocket for sugar

an apple, a handful of oats.

and all that you’ve held,

the way you’ve asked for forgiveness

turns out redemption is this:

an animal neck that arches

untamed breath on your wrist.

…When men returned from the hunt dragging their conquests behind – they told stories of daring and bravery – of mishaps and mistakes.

At home the women washed and gathered  and they told stories of wounds and whispers  – of innocence and of wisdom.

At night, around the fire, dogs at our feet, bellies full of food,  sounds of the horses just outside of the campfire – more stories were told – a mix of adventures and redemption.

The stories united us. The stories are how we remembered and how we learned.

Later, we trudged through uncharted waters, over mountains and deserts, we traded stories with passing strangers. We gave them our books and they gave us theirs – the stories connected us.

When radio arrived we sat around the box eager to hear the storytellers’ voices – the same storytellers our neighbors heard and the folks across the state line too. Those stories connected us more.

Television came and we communed around the screen as it told us stories that people all over the country saw – jokes we all laughed at characters we all knew struggled mightily – and we were connected further.

When the Internet arrived, we found that even in our weirdest quirks  we  were not alone in our fascinations and we connected through their stories, their songs, their windows into each other’s lives.

In each iteration, we both gained and lost connection- but the medium was the same – the stories.

Humans are hard wired to connect through stories. In stories, we lose the isolation and we connect. We watch tragedy so we understand  we can and will bear tragedy. We laugh at irony and pathos. In laughter we build resilience to futures unknown. We cheer the heroes so that we too – might aspire to our heroic goals. We denounce the villains to suppress the villain inside us.

Through stories we recognize ourselves in others that may not look like us or seem like us – but we know that they are us – and this allays the beast we call loneliness.

I set out to tell a story. A story of what I know. A story of who I am – a woman – and what I love – horses. I am one of many women who love horses and write stories of them.

Beginning June 11, 2018 – what happens to be my 50th birthday-  we’ll publish not chapters – but scenes every week. Scenes are sometimes less than a 2 minute read and not more than 10 minutes.

I didn’t write it for money – but for love. If you feel the need to monetize this – I’ll gladly encourage you to make a donation to the Thoroughbred AfterCare Alliance.

Together, we make a HUGE difference in the lives of these gallant animals.

So let’s connect through story.
Comment.
Bash.
Love.
It’s the connection that counts.

Onward with the story – it starts here.